Click Here to shop Smile and Amazon will donate to PHS

Our Museum indoor exhibits are closed.  We are reconfiguring our exhibits to comply with the post-COVID rules and also installing a new heating and air conditioning system.

The museum will try to reopen as soon as possible.  We will confirm and provide more visiting details as we get closer.

If you have a group that wants to tour the museum, please contact us and we can make special arrangements.

But, you can visit the grounds and experience our “virtual” visit by viewing placards around the grounds that can be linked by your Smart Phone.  Come and have a picnic.

Tune to “PHS On-the-Road” at our Web Video Theater.

We need volunteers to keep our Society well!

Just a few hours or help on a particular project would help immensely.

Other skills that we need.

Memberships are the life blood of our Society – We will lose our touch with our past without your support.

Although June has been Membership Renewal Month, we are gradually changing our member renewals so that they will occur annually on the anniversary of your joining the Society.

There are many resources for Portsmouth History.  We have a dedicated web site to help point you towards those resources.

Visit our “Hub” to Portsmouth History at

Keep Up With What is Going on with the Society. 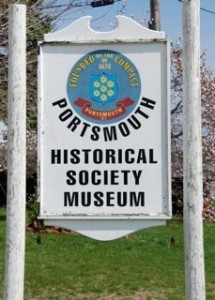 What We Are All About

The Portsmouth Historical Society is a volunteer nonprofit organization dedicated to the preservation and interpretation of Portsmouth, Rhode Island’s history.

Our long term vision is to protect and promote Portsmouth’s cultural heritage by creating a secure and sustainable facility, where, in conjunction with other local organizations, we can store, maintain and display our collection of historic artifacts, offer lectures and research assistance to the public, and stimulate the study of our town’s history for future generations. We strongly believe that the uniqueness of Portsmouth today is defined by our past.

The Society fulfills its mission by:

1. Maintaining and providing tours of the historical buildings in its possession:

4. Arranging exhibitions which use historical materials to enrich the public’s understanding and appreciation of Portsmouth’s rich history.

5. Presenting programs on topics that build enthusiasm for preserving and supporting our local history.

Would you like to become a member?   We welcome your help and support.

Go to our Membership/Support Page to see how you can help (Click Here).

Get a copy of our Membership Form.

Committees -Please consider joining one of our Committees to help us out.

Please tell us what you think by completing our short survey .

( To complete the survey click here or go to https://www.surveymonkey.com/r/PHS2020 )

A SHORT TOUR OF THE HISTORICAL SOCIETY BUILDING

Got any historical documents or artifacts in your attic or basement?

Contact Us and we can either do a high resolution scan of them or accept them for preservation.

PHS is Portsmouth Business Assn 2018 Business of the Year  – See the Post.

48 Replies to “About the Society”