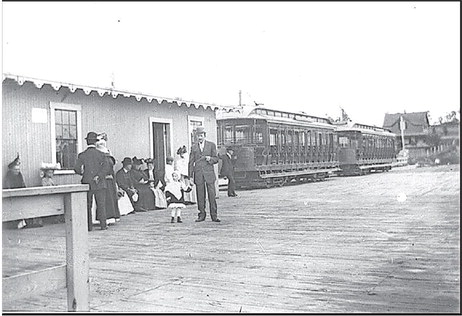 The Portsmouth Historical Society recently received a special gift related to Aquidneck Island transportation. Through the generosity of Mrs. Beverly Hall, the Society has received two log books of the Newport and Providence Railway Company.

This trolley company (1903-1925) was the builder/operator of one of the two trolley lines on the island back then; the other being the Newport and Fall River Street Railway Company (1898-1925).

The Newport and Providence line ran ultimately from Newport’s 5th Ward out Spring Street, Broadway, the West Main Road and Bristol Ferry Road to a ferry wharf. There passengers would cross the bay to Bristol on a ferry owned also by the trolley company.

The log books record, mostly by hand, the minutes of the Board of Directors and the Stockholders meetings during the life of the line. Of interest are mentions of the purchase of 18 miles of steel rails, copper wire, tree rails (ties) as well as bolts, spikes, angle irons and tie rods. Also included is the purchase of both open and closed trolley cars. Also recorded are the negotiations with various landowners for the right to cross their land.

Two hills were considered too steep for the trolleys to climb: Thurston’s Hill (Newport Water Works today) and Turkey Hill, and the trolleys had to go inland across farm land.

The records have been abstracted by Town Historian Jim Garman, highlighting all the important names, votes and decisions of the company’s officers and stockholders. The abstracts will be available to researchers when the Society’s Museum is open in the spring.

Hall’s father, George Towle, was the manager of the trolley line and the bus line which replaced it.

The Portsmouth Historical Society is very grateful to Mrs. Hall for this valuable donation to its archives. It is an important historical record related to Aquidneck Island mass transportation a hundred years ago.