Posted by: Rich Talipsky Categories: What's Been Going On?
2 Comments 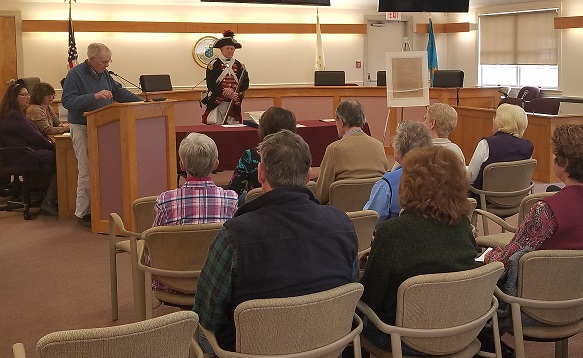 The founding of Portsmouth was made official on March 7 with the signing of the Compact of 1638 that established the settlement of Portsmouth RI. It was the first document in American history that severed both political and religious ties with England, and has been called “the first instrument for governing as a true democracy”.

Also on display was Portsmouth’s original copy of the Declaration of Independence (called the third generation “Southwick” copy). Upon the signing of the declaration in Philadelphia, the Continental Congress commissioned its official printer, John Dunlap, to create copies to be dispatched on horseback to each colony. About July 14, 1776 RI Secretary of State, Henry Ward, commissioned Newport printer Solomon Southwick to print copies for each RI town. It is believed that only a few still exist, and that Portsmouth is the only municipality to possess their original copy.