An Eviction at Southermost School 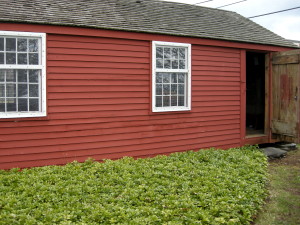 Widow Sarah Strange took up residence in the Southermost School after the death of her husband. At a town meeting in 1746 she was ordered out so that the schoolhouse might be improved and put in use for the use to which it was built. This story was recorded in Edward H. West’s article “The Lands of Portsmouth, Rhode Island” that was published in 1932,

How much would you give for a glass of wine? Back in 1666 Richard Searl sold a three acre lot just above the Bristol Ferry to Mary Paine. Mary was the barmaid at Baulston’s Tavern and the land was exchanged for a “pint of wine.” Mary later married John Tripp who used the land for a ferry house. Although this deed wasn’t registered, the Town Council accepted the deposition of William Collinge as to how the land was transferred.
(Story from William West’s 1932 article in the journal of the Rhode Island Historical Society on the “The Lands of Portsmouth, Rhode Island). 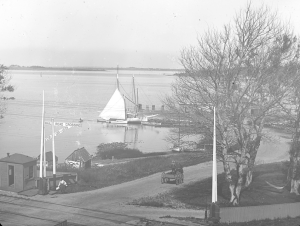 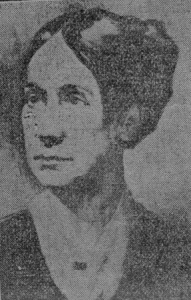 Image of Dix from a newspaper clipping

Who was Dorothea Dix and what is her connection with Portsmouth, Rhode Island? Dix is one of those names that you may have heard but can’t quite place. She was a social reformer who was active nationally and internationally from the the 1840s to her death in 1887. She is most known for championing the cause of the mentally ill who at that time were usually locked away in prison like conditions. Dix was a frequent visitor to Portsmouth and her visits here were an important part of her development as a reformer.
Dorothea Dix first came to Portsmouth as part of the household of William Ellery Channing. Channing was a noted early figure in the Unitarian Church. He had deep roots in Aquidneck Island and would summer at Oakland Farm off of East Main Road. 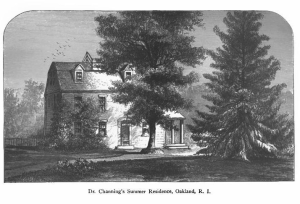 Oakland Farm was close to the little Union Meeting House and Channing would meet with the farm families of the congregation weekly during the summers. During the spring and summer of 1827, Dix came from Boston with the Channing family as the governess to the Channing daughters. Dix was recovering from tuberculous and could no longer practice her occupation of teaching. The Channing daughters described her as “strict and inflexible in her discipline,” but they appreciated this strictness later in life. They wrote “At the little Union Meetinghouse which adjoined Oakland, our place on Rhode Island, Miss Dix always had the class of troublesome men and boys, who succumbed to her charm of manner and firm will.” Indeed Dorothea Dix started the Sunday School at the Union Meetinghouse and came back to visit whenever she stayed with the Channing family. Her visits to the Sunday (Sabbath) School were recorded in newspaper articles and church reports. One account shows Dix bringing two young men with her to Newport to bring back an organ she bought for the school. With that organ, music became a more integral part of the services and school. Concerts and singing of the psalms began. Later one of the Channing daughters would also donate an organ in her father’s name.
The Channing daughters describe her as a “constant visitor” after the death of her grandmother. “She delighted to drop in unexpectedly, and then suddenly receiving a letter from a poor soldier at Fort Adams, would start off at a moment’s notice to right this wrong and persuade the government to improve the arrangements for the comfort of the men.”
On one visit to the area Miss Dix became aware of the plight of Abram Simmons. An article in the April 10, 1844 Providence Journal attributed to Dix, illustrates the treatment of the insane in Rhode Island at that time. Confined to a dungeon in Little Compton, Simmons lived “in utter darkness, encased on every side by walls of frost, his garments constantly more or less wet.” Dix persuaded Dr. Cyrus Butler to donate $40,000 toward the establishment of a facility for the poor insane as long as matching public funds were raised. Butler Hospital for the Insane was created from that gift.
Efforts to ensure humane treatment for the mentally ill in Rhode Island and even in Portsmouth were not always successful. Dorothea Dix joined Thomas Hazard of Portsmouth in trying to move a young carpenter named Dennis from the Portsmouth Asylum into a hospital for real care. Appeals to Asylum supervisors and even the town council were unsuccessful. Hazard writes that “It was some weeks or months after the failure of this effort to relieve poor Dennis, that I visited the Portsmouth Asylum in company with that inestimable friend of humanity, Dorothea L. Dix. “ They helplessly watched as poor Dennis died while they were there. Even in Portsmouth it was difficult to shake prejudice against the mentally ill.
Dorothea Dix came to Portsmouth to restore her health, but she left her mark on the community. She used her teaching talents to begin a Sunday School that continued for almost a hundred years. The gift of an organ enabled the church to emphasize music education for all. Some of her early work in social reform benefited mental health in Rhode Island. Dorothy Dix left her mark on our community.

Moving a Windmill (Sherman’s Mill) – Now at the Prescott Farm.

1858
5 May 1858
… Uncle John [Sherman] has bought a windmill in Fall River (RI) and Jonathan Sherman has contracted to take it down and move it here on his land west of the main road _ and put it up again. It was moved from Warren, to where it now stands.

15 May 1858
… Helped Jonathan Sherman unload the top of the Mill about 9 o’clock. He brought it in 6 parts, sawed through from top to plates at one load with 4 horses.

31 May 1858Built wall for Father (Benjamin C Sherman] he went to Fall River with Uncle John & Jonathan Sherman to help take down the Mill. They got three sides down & brought them home being after 10 o’clock when they got home. Weather fine & calm morning, light breeze from south afternoon.

1 June 1858
Built wall for Father. Uncle John’s hired man has been there two days helping us Uncle having Father’s Oxen to go after Mill. Warm part of day with little rain in the night. Jonathan did not get home untill 3 o’clock in the morning with the loads of Mill. 2 June 1858

8 June 1858
… Helped knock the shingles off the side of the Mill A.M. They re going to take them off and nail the boards on firm then lay the same shingles again. ..

11 June 1858
I done but little work today, feeling quite unwell; went up where the men was at work on the Mill. Helped them some about raising the poles to make a Derrick to put the Mill up with; they are near 50 feet long. The bottom of the Mill is laid and some of the sides ready to put up. Four men at work on her. Wind blowing from the southwest, thundered and rained at night just after six o’clock.

17 June 1858
I split some wood & George packed it up to dry. Went up to the Mill awhile and helped some. They got up all the sides but one.

25 June 1858
I worked for Jonathan on the Mill – shingling some and putting together the driving wheel on the main shaft. An exceedingly hot day …

26 June 1858
I worked for Jonathan today putting on the top of the Mill. Got it all on. Uncle is going to have it new shingled. Had a very favorable time being so still and very warm …
14 July 1858
… I went up to Uncle’s Mill afternoon – put up the arms- I helped some. They have got the machinery all put up and will finish it in a short time,

22 July 1858
… We went over then helped Uncle John get three loads of hay when it began to rain a little- then held up a while, then rained again a light shower. Jonathan Sherman finished Uncle’s Mill today. He had $500 for moving and putting it up in running order.

16 Aug. 1858
… Worked on Uncle Johns Mill-sails, patching and sowing up the rents, afternoon.

17 Aug 1858
More rain this morning and cloudy all day. Finished mending the sails. Jonathan Sherman came out from Newport and Mr. Borden came in the stage from Fall River to get the Mill in running order to grind corn. Mr.Borden was the owner of the Mill when Uncle John bought her. We went up and took up the Big stone (Runner) found that we should have to move the bed stone to make the wheels gear in to each other.

18 Aug 1858
Cut away the floor and moved the bedstone & leveled it & put on the Runner. Rigged the sails afternoon & started her up for the first time in 4 years. A damp, strong south-west wind- she went off smart with sails reefed; ground about 5 bushels of southern corn for feed – some was mixed with oats. Levi Cory bought two grists. The first one that was bought.

19 Aug 1858
We took up the Mill stone and packed it with the small picks (having 25 or 30 of them together) making the surface of the stone much finer than the old way of picking with a single pick and not taking a quarter of the time to do it. We started up and ground a little at night but the wind light from north west.

20 Aug 1858
Had to move the small bed-stone about an inch, wedging around it again; worked a good while to make the Break clear the driving wheel, and doing other small jobs. Started up the Mill and ground 6 ushels of flat corn, making fine meal for John Elared of Newport, get 6 cents a bush. For grindingit; wind south west, whole sail breeze.

21 Aug 1858
Isaac Grinnell came out to set up the curb around the small stone (it is made of staves & hooped) and done one thing or another about the Mill. A fine clear day, wind west, light.

30 Sept 1858
Worked on the Mill- wedging the arms of the driving wheel to keep it firm and strong. Asa Tibbets was there & assisted us. Jonathan left many things undone which was needed to be done. Started up and ground 13 bushels of corn for feed, one bushel of round corn for Father, and one bushel of rye in less than two hours; wind blowing strong from west nor’west clear but cool and drying.