Rhode Island’s contribution to World War II vastly exceeded its small size. Narragansett Bay was dotted by some of the country’s most important army forts and navy facilities. Attendees learned fascinating details about Aquidneck Island’s wartime role, shared by Christian McBurney, a popular historian, speaker, and co-author of a book on the subject, which will be available for sale. McBurney has published many books on RI, and manages a blog SmallStateBigHistory, which contains a wealth of RI history.

Lecture: The Dorr Rebellion By Russell DeSimone Wed May 19th 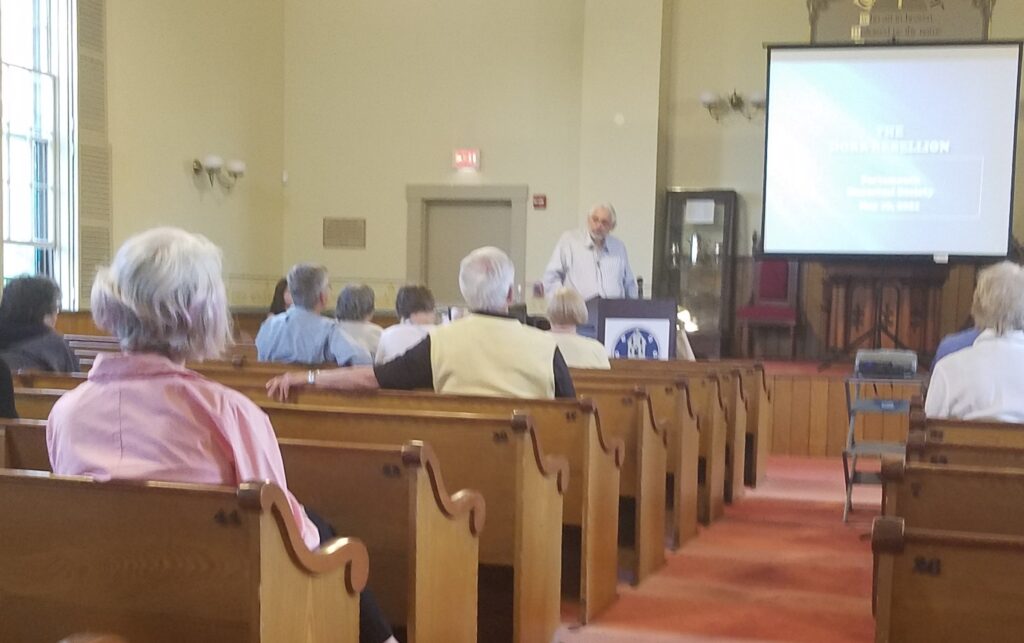 In the spring of 1842 RI had 2 governors. Thomas Wilson Dorr, the “People’s Governor”, forcibly tried to implement the People’s Constitution, which he believed had replaced the antiquated colonial Charter. The Dorr Rebellion raised profound questions of citizenship. Russ DeSimone, an accomplished author and historian, is a leading authority on this fascinating piece of Rhode Island history, and has published many works on the subject.

April 24, 2021  TREE PLANTING IN HONOR OF PAST PRESIDENT HERB HALL

In cooperation with the Portsmouth Tree Commission, the Portsmouth Historical Society hosted an Earth Day tree planting on Saturday April 24 in honor of the late Herbert Hall, Past Presidents of the Society.

The tree was provided by National Grid as part of their annual Earth Day donation to the town.

Herbert Hall (1942-2021), a longtime member of the Historical Society, served as Custodian and Treasurer and was President from 1992-2015

The public was invited to the outdoor ceremony on the Portsmouth Historical Society Museum grounds at 870 East Main Road (at Union St) . Jim Garman, Town Historian and Past President of the Society provided brief remarks on Herb’s long career with the Society.

Also on display was Portsmouth’s original copy of the Declaration of Independence (called the third generation “Southwick” copy). Upon the signing of the declaration in Philadelphia, the Continental Congress commissioned its official printer, John Dunlap, to create copies to be dispatched on horseback to each colony. About July 14, 1776 RI Secretary of State, Henry Ward, commissioned Newport printer Solomon Southwick to print copies for each RI town. It is believed that only a few still exist, and that Portsmouth is the only municipality to possess their original copy.

Following the tour, attendees are joined the Society members for a no-host lunch at The Tavern on Main restaurant, located a few doors down from the Armory, to continue our discussion with Patrick Donovan.

This is the first of several trips by the Portsmouth Historical Society to museums throughout Rhode Island with the hope of sharing our mutual interest in historical preservation and education.

Last Call: The beginning of Prohibition

Thursday 16 January 2020 at 630 PM at the Library – Town Historian Jim Garman gave a lecture titled “Last Call: The beginning of Prohibition” with emphasis on the local aspect of “The Noble Experiment”. It will be held at the Portsmouth Library and is  co-sponsored by the Library and the Portsmouth Historical Society. This date was carefully chosen because it commemorates the night Prohibition went into effect at midnight exactly 100 years ago on that date.

Those who love learning more about our rich history through books, came to the right place!

Copies of The Burning of the Gaspee are available for checkout at Portsmouth Free Public Library.

Wednesday 11 December 2019 at 630 PM at the Library – Town Historian Jim Garman presented a lecture on “Steamboats on Narragansett Bay and the Sakonnet River” at the Portsmouth Free Public Library. This illustrated lecture was co-sponsored by the Library and the Portsmouth Historical Society. The talk included many photographs and information on many of the Bay/Sound steamboats, including the Fall River Line and the Sakonnet Line.

Description:  As in our past “History Comes Alive” programs Portsmouth Historical Society guides shuttled groups of visitors to the presentation sites.  This year was more interactive for the visitors – they were more involved in the presentation.  Visitors spent about 15 to 20 minutes at each location on the Portsmouth Historical Society Museum grounds.

In the Audience Room upstairs, Richard Schmidt portrayed Temperance preacher John B. Gough who traveled through the area with his rallies. Maria Schmidt will portray the wife of a reformed drinker who lauds Gough’s efforts.  This room was actually used for Temperance speeches, so we will be having a Temperance rally with songs, signing the pledge, etc. We stepped back in time to the 1870s.

In the Southermost School, Cindy Killavey will portred Isabella Fish conducting her first class of the year at Newtown School.  She went over school rules and visitors were assigned the name of an actual student in her class.  Isabella led a spelling bee and poetry reading demonstration. We stepped back to the 1900 time-frame.

In the kitchen area of the Museum, Portsmouth’s first girl scout leader, Gertrude Macomber, tutored her scouts on how to pass their cooking badge.  Denise Betz (as Gertrude) quizzed the visitors (scouts) on common cooking questions like how to prepare eggs three ways. Could you pass the 1924 Girl Scout Cooking test?  We stepped back to a 1924 time-frame.

In the Old Town Hall miller and farmer Benjamin Boyd (portrayed by Jim Killavey)  told stories about windmills in Portsmouth.  Visitors were assigned questions to ask (they are reporters interviewing him for a news article).  Benjamin Boyd’s answers were taken from actual newspaper articles on him.  This wa a 1940s time-frame.

On a winter’s evening in 1673, tragedy descended on the respectable Portsmouth, Rhode Island household of Thomas Cornell. His 73-year-old mother, Rebecca, was found close to her bedroom’s large fireplace, dead and badly burned.   The Portsmouth Historical Society historical book club  will host a discussion of Killed Strangely: The Death of Rebecca Cornell, by Elaine Forman Crane.  The book relates the compelling story of Rebecca Cornell’s death and its aftermath, vividly depicting the world in which she lived. The  discussion will be led by Gloria Schmidt, PHS member, author and noted expert on Portsmouth Portsmouth history.    Copies of the book have been placed on reserve at the library; just inquire at the front desk.  The event was free,. The History Book Club always welcomes new attendees who enjoy reading about our rich local history.

This was a free courtroom drama, based on an actual transcript of the 1673 murder trial of Thomas Cornell. Actors from the Portsmouth Community Theater portrayed witnesses that gave testimony during the trial. This was a smaller cast version of the original “Ghostly Witness” that was performed in honor of Portsmouth’s 375th Anniversary Celebration. After they have heard the evidence, the audience got a chance to take the role of jurors and vote on the verdict.

Spanning more than three centuries of Rhode Island’s history, the Women of the East Bay Exhibition recognized and celebrated women who have made a difference in their communities. This exhibition is currently on display at Portsmouth Free Public Library. Four Portsmouth women are part of this exhibition – Anne Hutchinson, Julia Ward Howe, Sarah Eddy and Emeline Eldredge.

Gloria Schmidt of the Portsmouth Historical Society shared what she has learned about the lives and contributions of each of these women. Portsmouth’s founding and tradition of strong women can be credited in part to Anne Hutchinson. Julia Ward Howe, known as the author of the poem that became the “Battle Hymn of the Republic,” was a summer resident of Portsmouth for over forty years. A pioneer woman photographer and artist, Sarah Eddy worked for women’s suffrage, arts education and humane treatment of animals. Emeline Eldredge was a pillar of the community as superintendent of schools, library volunteer, and director of an arts center for Portsmouth’s youth.

This event, that was done last summer, re-traced the route of Col Barton of the revolutionary army who engineered a raid that started in Warwick Neck and sneaked by British warships in the bay, landed in Portsmouth, kidnapped British General Prescott and returned to Warwick the same night.  A group of kayakers did the same this year.  Since the weather did not cooperate on the 9th, the July 24th was perfect.

Portsmouth, Rhode Island has a proud history of amazing men and women. Although it may be easier to trace the lives and influence of the Portsmouth men, our community has had women who shaped our character. As we remember the birthday of Anne Hutchinson, the Portsmouth Historical Society will celebrate some of these women on

This is our third annual celebration of Portsmouth Women.

Visitors will be able to view a special display of artifacts for many of the women from the Society’s collection. Items will be on display for this day only. At 3 PM in the upstairs meeting room there will be a “round robin“ presentation on these women who have contributed to Portsmouth. There will be a brief description of each woman’s role in the Portsmouth community. Cards for each woman will be read by audience members. Those who have a special connection with a woman are encouraged to read her card. After the presentation there will be an opportunity to continue viewing displays. The booklet “Portsmouth Women,” with more detailed information on each of the women in our past celebration, will be available for a donation ($5 is the suggestion) to pay for printing costs. A brochure on this year’s honorees will be added to the booklet.

Only one of our women, Dorothea Dix, could be considered famous. Some of the women have had quiet yet influential roles in our Portsmouth community. The story of Fannie Brent Scott came to light when the Society received the generous donation of a portrait of her which was painted by noted Portsmouth artist Sarah Eddy. Fannie’s story, from freed slave in Virginia to well loved Portsmouth community member, makes us aware of the diversity of experiences Portsmouth women have encountered.

This year we honor: