Tucked into the corner of the museum is a small room dedicated to Julia Ward Howe. Outfitted as a typical Victorian bedroom, the room houses furnishings, clothing and items that belonged to Julia when she summered in Portsmouth just up Union Street. When the British Broadcasting Company (BBC) came to the US to film a documentary on Julia, this room was one of the sites they most wanted to use. Julia is most famous as the abolitionist and poet who wrote the words to the “Battle Hymn of the Republic.” But Julia was active in many causes – the vote for women, establishing “Motherʼs Day,” world peace, and literacy. Many of the greatest writers of the her day came to visit her at Oak Glen.Many of the items were donated to the museum in the 1940s by Maud Howe Elliot, Juliaʼs daughter. The items reflect her various causes. Among the most precious artifacts is Juliaʼs writing desk. 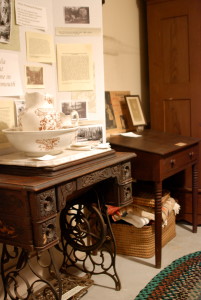 At the suggestion of Juliaʼs friend – Henry Wadsworth Longfellow – the desk was built high enough for Julia to write standing up. It has since been cut down to a more normal height.  Also on view are a shawl, a hat and a lacy cap that belonged to Julia. Next to her shawl are writing implements and a note about how Julia penned her famous poem, “The Battle Hymn of the Republic,” on her husbandʼs stationary in almost darkness. Other items in the room were donated by the family that purchased Oak Glen after Juliaʼs death and may have been in the house during her time there.

Timeline for Julia in Portsmouth:  Julia Howe and Portsmouth Timeline

Poem Julia wrote when she moved to Lawton’s Valley.  In my valley-From sunset ridge: poems, old and new

Here is a Story of the Battle Hymn of the Republic as told by her Great Great Grandson from FamilySearch.org

Julia Ward Howe in the Word of OrsonWells