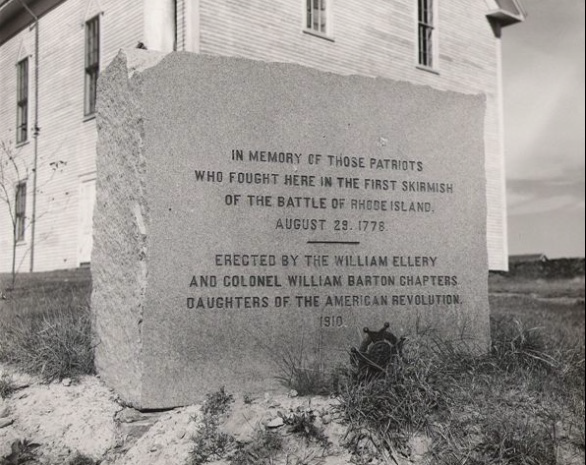 On August 29, 1910 on the 132nd anniversary of the First Battle of Rhode Island, the large granite boulder was unveiled on the grounds of the museum (then the Christian Union Church).  This site was chosen because it was near the location,reportedly, of an early skirmish in the Battle when American troops ambushed British forces on Union Street near Middle Road. It was through the united efforts of the William Ellery Chapter of Newport and the Colonel William Barton Chapter, Daughters of the American Revolution.

This monument was erected by the Daughters of the American Revolution. This attractive monument has been placed on the spot where so many brave men fell on August 29, 1778 at the commencement of the Battle of Rhode Island. .

The inscription reads:  “ In memory of those patriots who fought here in the first skirmish of the Battle of Rhode Island, August 29, 1778.”

The Battle of Rhode Island was the only major action in Rhode Island during the American Revolution.  It was fought throughout Portsmouth with major fighting taking place on Quaker Hill, Turkey Hill and the area around the earthen work Butts Hill Fort.

The British had occupied Aquidneck Island since 1776.  In August of 1778 the American forces had hopes that with the help of the French navy they could retake the island.  General Sullivan and his troops moved across Howland Ferry from Tiverton and took up positions around Butts Hill Fort. When the French fleet failed to come and the British fleet arrived, Sullivan’s forces had to make a retreat. The Battle of Rhode Island took place as the British forces moved to engage Sullivan’s troops and prevent them from escaping off the island.

Among those fighting in the battle were the members of the Black Regiment, the First Rhode Island Regiment.